Why I don’t believe in the Cry It Out method … 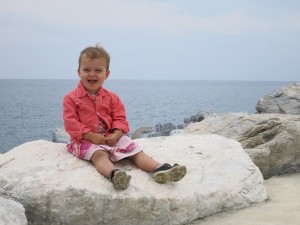 3:30 am and my alarm goes off for yet another nappy change to make sure my daughter won’t wake up soaking wet again.

At 17 months, Briana easily drank a full bottle of water or more at night. At 9 months she started asking for water at night, at first only a few times. She would take a few sips from her bottle and happily go to sleep again. It did not take long and she woke five times per night on average to ask for water; sometimes a lot more often.

Her urge to drink seemed to get stronger because she soon put up a fight to keep the bottle in bed with her, clutching it tight the way other children might cuddle their favourite soft toy. Driven by sleep deprivation, we gave her the bottle. Now she would only wake us up when the bottle was empty but she emptied it faster and faster. So, we were still not sleeping through and she needed at least 2 nappy changes at night to keep her dry.

At 17 months we discovered the reason for her water drinking habit: she suffers from silent reflux and she used the water to soothe her pain. Clever little girl I thought while feeling bad of course that we had not figured this out any earlier. I was happy about two things though:

It was our GP who suspected silent reflux and she prescribed some medication that showed results very quickly. Of course by now the water bottle was Briana’s life line at night and she did not give it up easily, not trusting the medication right away. We had ups and downs because drinking too much water after the medication meant that it would loose its effect. With a lot of patience and understanding for Briana’s fear of pain, we managed to wean her off the bottle at night (at least for most nights and when she’s not teething :-)).

To all sleep deprived parents: I’m sending you lots of energy and patience, not being able to sleep through the night for long periods of time is very tough. It’s hard on you and it’s hard on your baby too.

I would love to hear your comments on the cry it out method.

Switch to our mobile site

Please enter your e-mail address. You will receive a new password via e-mail.